The Calise & Sons bakery, located in Lincoln RI, is one of the biggest independent bakeries in New-England. Founded in 1908 Calise & Sons serve over 1,000 wholesale and retail customers through own distribution today. Outstanding customer service is a cornerstone for Calise & Sons. Orders received by 3:00 PM are delivered fresh the next day. With a product range of more than 140 manufactured products and over 300 sku’s all together, this is not only a challenge in production but keeping orders straight and shipped quickly and accurately, even more for dispatching and shipping.

In 2009 the Calise family committed to a capacity expansion needed to keep up with the continued growth in the business. The production expansion was only possible, by moving part of the route order fulfillment off site. And so a depot in Providence was established to handle the 24 local routes. If accurate distribution was a challenge before, the new operation with the extra step of bulk shipping to the depot, tightened that operational window even more. It was clear to Michael R. Calise, President of the bakery, to invest in some automated type of order picking system. By 2010 the first Pick by Light system was installed in the Providence depot. The technology proven more efficient, the second installation at the main production facility followed suit in 2012. The system at the main plant in Lincoln handling the order selection of the other depots and distributors in Calise’s network.

Calise’s growth continued unabated. In August of 2015, Calise purchased the route sales of a local  bakery and in the following year Calise opened two new distribution facilities. DSD routes expanded  overnight from 54 to 81, providing service to all major retailers and foodservice customers throughout RI, MA and CT. The Providence depot was converted to a full-blown distribution center for picking all routes and distributors. This step required not only an expansion, but also a fundamental change in the operation of the Pick By Light system.

After a few fruitless attempts working with the supplier it became clear Calise’s needs had outgrown the existing system and its´ capabilities. Which is why, at the end of 2017 Calise turned to Pcdata to review their complete shipping operation and ask to work out a better solution. The Pcdata engineers analyzed data, observed the floor activities and presented a
comprehensive new concept, which was received favorably. The last hurdle was to incorporate the existing, still functional hardware from the old supplier into the new solution,  owered by the Pcdata software. After some clever engineering, Pcdata was able to use the vast majority of the existing hardware and only minor parts needed to be updated.

The changeover took place in spring 2018, which was another challenge both for the Calise team and the Pcdata engineers. The old system was still live in a full day-to-day operation and at the same time the hardware had to prepared for the switch and the users trained to the new system and a new concept. Harry DiDino, Shipping Manager of Calise recalls; “that was a hard week but the Pcdata engineers guided us through the whole process and were a great help”. “People were able to  earn the system in one shift, at the end of the day they were able to use it”, adds Chris Cinieri, Continuous Improvement Manager of Calise.

The new Pcdata concept includes a Pre-Dispatch terminal in the DC which records all incoming goods and assigns them to the pick streets. The different pick streets have pick locations with displays for the routes of the different depots and distributors. Each stack gets a ticket at receiving which works as a “license plate” throughout the picking process.  Harry DiDino describes this new step as “incredible, it works wonderful and speeds up the process. If baking is late, we can react much quicker than before.”

Since the Pcdata´s Distrib handles multiple sales days a full inventory management is covered, too. Since the changeover, the Pcdata system has already been expanded with more routes, with old and new Pcdata hardware working side by side. Looking back at the changeover Harry DiDino reflects; “the system is easier to understand, with new capabilities and it is error-proof. We never had a break-down but if we need them, the service desk of Pcdata is great. Changing from the old system to Pcdata was like Night and Day…..”. 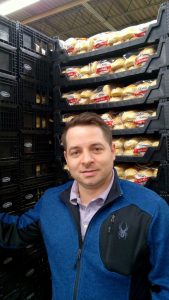 “People were able to learn the system in one
shift, at the end of the day they were able to
use it”