Holland and Barrett is expanding. «Over the past few years, we have consistently opened 20 to 25 new stores each year,» says logistics manager Vincent Schippers of Holland & Barrett, who now own 162 stores in the Netherlands and 18 shops in Belgium.

Positive Pcdata PTL-experience in the UK

Strong growth of online sales forced Holland & Barrett to review order handling in their warehouse operations. The decision therefore was made to set up a separate Internet operation in addition to the existing retail store, resulting in a 30,000 sqr ft (3,000 m²) expansion of the Beverwijk DC, including a mezzanine area of about 17,000 sqr ft (1700 m²). Pcdata was responsible for the entire project. “Our parent company in the UK was already using a Pcdata’s Pick-to-Light system. We believe Pick to Light is the fastest order pick method, faster than voice pick – as verbally confirming picks and checking out boxes is relatively time consuming. In cooperation with Pcdata and our parent company, we then developed this detailed concept for our Internet operation «, explains Schippers.

The e-commerce operation is largely located on the mezzanine floor, where a nine-zone picking system was installed. Eight of these zones are set up in 2 rows with flow racks, designed for fast movers. A total of 1,500 pick locations installed with pick to light-displays. The ninth zone consists of shelving with space for another 8100 slow movers. A conveyor connects the eight flow rack areas with the ninth zone. In this 9th zone the boxes, filled with the fast mover SKUs are placed on pick carts, to collect the missing – slower moving – products.

The process starts when pre-labelled shipping boxes are placed on the conveyor. The barcode on the box is scanned, linking the box to the associated internet order. The conveyor transports the shipping boxes to the correct zones, where it is pushed out for picking. Each zone display will show the number of products the picker needs to pick for that particular zone. At the same time pick-to- light displays will light up, show how many pieces need to be picked at that particular location. With the push of a button each pick is confirmed and the pick- to light- display turns off. When all displays in a particular zone have been pushed, the operator moves the box back onto the main conveyor and it is moved to the next zone.

Each of Pcdata’s five Pick Carts have the capacity to hold 20 boxes. Scanning the barcode links that box to one of the locations on the cart. Each location on the cart is equipped with a put to light display. Once the Pick Cart is loaded, the touchscreen tablet also mounted on the cart informs the operator which product location to go to. The product location is confirmed with a scan, lighting up the displays on the car, which indicate the number of items from that product location needs to be placed in each box. As the picking route in the warehouse is completed, the operator puts the boxes on the conveyor that transports them to the six packing tables on the ground floor. A delivery note and any necessary folders are added and the box is closed. Final action is to attach the shipping label.

Pcdata provided the entire solution, from pick to light system and pick carts, the software controlling the conveyors, the conveyors themselves, to flow racks and shelving. As main contractor Pcdata was responsible to plan the entire project including integrating all the separate systems.» The whole project went according to plan, thanks to the thorough and realistic time management. Pcdata is a well-organized and intelligent group. They will look at various possibilities, know what is possible or not, and communicate the options clearly.”

Although the system has only just been up and running and the new processes have yet to be institutionalized, Schippers strongly feels the order pick productivity has increased by one and a half to two times its original numbers. And at the same time the number of pick error have decreased, based on customer feedback.

What does our Client say. 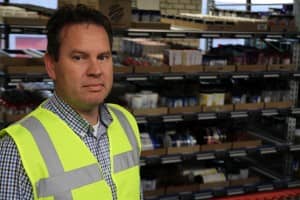 “There is much more calm in the workplace, which also has increased job satisfaction considerably”