Twice a week Ici Paris XL delivers to 250 perfumeries across the entire Benelux region from its distribution centre located in Vilvoorde, Belgium. The operation uses two techniques in its order assembly processes: Pick to Light for fast moving SKU’s and barcode scanning for the slow moving SKU’s. Pcdata, the supplier of the system, combined both methods to create a completely integrated and highly optimised order picking solution. Thanks to this system, Ici Paris XL are now in full control of the productivity and quality of their order picking operation.
When the current distribution centre in Vilvoorde was first commissioned in 2006, the perfumery first decided to invest in the fast moving segment of its operation: “We were looking for a system, which could enable us to increase both quality and productivity of the order picking process. These are criteria which do not always go together. In the case of capital investments often one is at the expense of the other”, says Danny Roegies, project manager of the retailer.

For the fast moving element of the operation, Pick to Light turned out to be the optimal solution of Ici Paris XL. Two picking ‘streets’ with 12 pick zones each are centrally located within the distribution centre, connected to each other by a central motorised conveyor system. This conveyor transports plastic totes, into which products are picked, automatically to the picking zones where that tote requires product. An order picker in the zone is directed by light displays which product to pick and how many pieces. As each pick is completed, the product is placed in the destination tote and the light displays turned off by pressing the push button on the light display. “We use Pick to Light for products of which we need to pick several pieces a day or often also several pieces per order line. Because these products are located next to each other, a small area with a relatively high number of picks has been created. By minimizing the walking distances for these products, we achieve a high productivity”, says Roegies.
In 2002 Ici Paris XL became part of A.S. Watson which holds over 10.000 health and beauty stores. This triggered a tremendous growth period for the company. In the Benelux region the retailer currently has nearly 250 stores, a number which is still increasing. Concurrently, the product range has also been expanded, increasing the size and complexity of the picking operation: “We have an assortment of 15.000 products, but not every product is stocked in each store. People living at the coast simply buy other products then people living in Antwerpen or Wallonië”, tells Roegies. This rapid growth was one of the key reasons to choose the Pcdata Pick to Light solution. “Because it was un-certain how fast the operation would grow, we had to be prepared for expansions and system changes. With this system this is no problem. Pcdata offers us the required flexibility for the future. Pcdata also has a lot of knowledge and offers the best value for money”, tells Roegies.
In deploying the system, Pcdata was not only responsible for implementing the Pick to Light element of the project, but as main contractor also oversaw the complete implementation including flowracking conveyor system, strapping machines and software. “Thanks to the Pcdata software we are able to constantly control the workload. In the warehouse we have a screen which shows the amount, order lines and crates we already handled and how many we still have to do. As soon as we see that one zone is getting behind, we can react immediately add additional resource to that zone.”

3 years after the Pick to Light implementation was completed, Ici Paris XL decided to turn their focus on the picking efficiency within their slow moving sector. These products were stored in racks and picked using paper pick lists. Quality was not of the desired standard: “Three quarters of the total picking errors took place in this rack area, however in this area only half of the total amount of picks were being assembled!”, says Roegies. For the slow movers Pcdata developed a solution based on barcode scanning, which has been integrated into the whole system. For this purpose the rack area has been divided into 8 zones, each zone being served by the main conveyor which also crosses the Pick to Light area. As a tote arrives in a zone, the order picker scans the tote barcode and is shown on the screen of the barcode scanner the list of required pick locations within that zone. With the tote on a mobile picking trolley the order picker walks into the rack area, intelligently directed to the correct pick location via the shortest calculated route. Although many retailers choose voicepicking, in similar applications, Ici Paris XL deliberately chose barcode scanning. “Voicepicking is typically interesting in a situation where you have to pick more pieces of one product or large products, because you have your hands free. In our slow moving segment, commonly only one piece per pick is needed. Take for example green mascara, maybe we just sell just one in a month!”, tells Roegies. “Many employees also like to work with a MP3-player in one ear. We do not want to take this away from them.”
Thanks to barcode scanning, the accuracy of picking increased significantly, and currently averages 99.92%. One of the key reasons for this is that each individual product is scanned before being placed in the tote. If an operative attempts to scan the wrong product, an error is returned by the handset. This is also the case on the odd occasion when multiple pieces of the same product are needed – each must be scanned separately: “What we often find is that operatives scan the barcode of the first product ten times, and after that take ten pieces. Then it would be still possible to make a mistake. We made this unattractive by increasing the minimum time between two consecutive scans”, tells Roegies. “The solution also contains a large dose of intelligence, which leads to higher productivity. Our employees are guided to pick in each aisle using the same intelligence that women typically use while shopping! When men go shopping, they first pick from the shelves at the right side of the aisle and then the shelves at the left side. Women take both sides at once, increasing their speed by reducing walking distances! We follow the same method in our picking aisles, each corridor being travelled only once”

The collaboration between Ici Paris XL and Pcdata did not end after the implementation. Over the years a solid relationship has been built between the two companies that has helped to continually improve the operation: “Pcdata has a lot of knowledge in this field. Together we have achieved consistently higher level of performance” says Roegies, who still has the space to expand the Pick to Light system should further growth make this necessary.
His satisfaction is firmly founded on solid facts that support the improvements within the Ici Paris XL operations. Thanks to the combination of Pick to Light and barcode scanning technologies, both productivity and quality have increased substantially. “Another key advantage it that he system is so easy to learn and use. This is vitally important as during peaks of activity the number of order lines can almost double, meaning we have to utilize a lot of temporary labour. You do not need to be an engineer to use the system!” 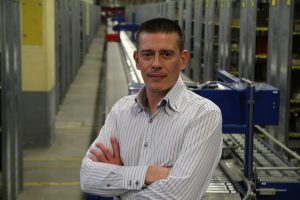 Danny Roegies, project manager Ici Paris XL:
“Thanks to the Pcdata system we are ready for expansions and future business changes.”