For their new DC in Krefeld, fulfilment experts Wir Packen’s chose Pick to Light as the perfect order assembly tool for their prestigious Nespresso Germany contract. Implementation schedules were extremely tight and Pcdata successfully installed the system within record time. Following the Dutch success story, the logistics operation for Nespresso Germany is now also managed and supported by a Pick to Light system from Pcdata.

Under the pretext of ‘everything from one source’ the German company Wir Packen’s, part of the Cleaver Group and founded in 1990, specialises in the delivery of custommade solutions for numerous companies amongst the most diverse of indus-tries. From direct marketing to arranging printed matter, but also taking care of complete logistic processes, the fulfilment specialist is a proven expert in their field. Wir Packen’s has handled the distribution for Nespresso throughout Germany for both B2B and B2C channels, since 2008.
“Before autumn 2012 this was done from our warehouse in Erkrath”, comments Branch Manager Theo Bruck-mann. “As a result of substantial growth we ran out of available space. To maintain an efficient operation and enable further growth, we had to go somewhere else.”
The new location was found in Krefeld where the fulfilment specialist moved into a brand new distribution centre. With a total surface area of approximately 10,000 m2, of which currently about 8,500 m2 is in use, the new building is more than twice the size of the original site.

The beating heart of the logistic process in the impressive DC is the Pick-to-Light system of Pcdata. “More than 90 per cent of the orders are picked and made ready for shipping using this system”, adds Theo Bruckmann, Nespresso Branch Manager at Wir Packen’s. As an order picking technology, Pic to Light is not a new concept for Wir Packen’s, as it was also used in the warehouse in Erkrath. “It is a highly dependable technique”, says Bruckmann. Bruckmann nods and adds: “The biggest advantage is that the quality has substantially improved since working with Pick to Light. Our error percentage dropped considerably. We have also noticed that products don’t get damaged as quickly and the number of claims has decreased substantially. Furthermore, the speed of our process has improved. Our order pickers are now far more productive, which is why we can deliver faster. Any orders placed before four o’clock today will also be delivered today. From this, of course, customer satisfaction will only benefit.”
But there are more advantages. Pick to Light is also very simple to use. New employees will be able to master the system in no time, which is a huge benefit to Wir Packen’s. The company operates with a relatively large work-force (approximately 200 people) of varying flexitime workers

So, it was a logical choice and more than enough reason to choose Pick to Light for fitting out the new DC. What was remarkable, however, was the choice of a different supplier. Wir Packen’s could have chosen to re-build and expand the existing Pick to Light system, but decided to purchase a completely new system from Pcdata. It was apparent from Bruckmann’s information that it was a conscious decision, not based merely on the very competitive price.
“The Nespresso products in The Netherlands have been successfully picked with a Pick to Light system from Pcdata since 2010. Their success story and their experience with Nespresso certainly played a part in our assessment”, Bruckmann clarifies.

The fact that Pcdata is an innovative enterprise, also played a part. Continuously developing the portfolio is of paramount importance to the supplier. “We continuously investigate how to further improve hardware as well as software. It is the only way to make the system grow with the wishes and demands of the market”, according to Bruckmann.Partly thanks to this continuous innovation the Pick to Light system from Pcdata is exceptionally flexible and quick to install. All that is needed is a lightweight aluminium profile and a feed cable (which is clicked into the profile) and the correct quantity of necessary displays. That the displays can be clicked into the cable as well makes it possible to change the configuration in a quick and simple manner at a later stage.

The installation of the system was just as quick and uncomplicated as the Pick to Light system itself. “We were operational within four weeks”. That’s how long it took for Wir Packen’s at their new location to again fully benefit from the many advantages of Pick to Light. “Which is a very good thing, because without Pick to Light we would not be able to meet the wishes and demands of the current market”, is Bruckmann’s closing comment. 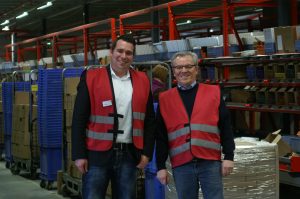 Branch Manager Theo Bruckmann (to the right) : “Without Pick to Light we would not be able to meet the wishes and demands of the current market”